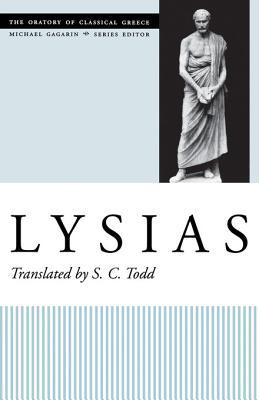 This is the second volume in the Oratory of Classical Greece series. Planned for publication over several years, the series will present all of the surviving speeches from the late fifth and fourth centuries B.C. in new translations prepared by classical scholars who are at the forefront of the discipline. These translations are especially designed for the needs and interests of todays undergraduates, Greekless scholars in other disciplines, and the general public.Classical oratory is an invaluable resource for the study of ancient Greek life and culture.

The speeches offer evidence on Greek moral views, social and economic conditions, political and social ideology, and other aspects of Athenian culture that have been largely ignored: women and family life, slavery, and religion, to name just a few. This volume contains all the complete works and eleven of the largest fragments attributed to Lysias, the leading speechwriter of the generation (403-380 B.C.) after the Peloponnesian War, who was also one of the finest and most deceptive storytellers of all time.

As a noncitizen resident in Athens, Lysias could take no direct part in politics, but his speeches, written for clients to deliver in court, paint vivid pictures of various private and public disputes: one speaker defends himself on a charge of murdering his wifes lover, while another is accused of having caused the deaths of democratic activists under the short-lived oligarchy of the Thirty (404/3), despite his claim to be protected by the amnesty that accompanied the restoration of democracy in 403.